Super excited about the mini topiary pots I'm working on…they are so cute! Working on the pots, should have them ready by Friday. Here's a peek:

Posted by fabulouslyflawedminiatures at 3:18 PM No comments: Links to this post

Need to fill your mini shelves with blankets but find they are too bulky? We now have shelf blankets that fit perfectly on a shelf as small as 1 inch deep. They look equally well on shelves up to 1 1/2 to 2 inches deep. These hand knitted stack of 3 come in wonderful deep, vibrant colors. They will add instant charm to your mini setting and create a realistic look on your shelf unit.

Note: These are faux blankets, they are intended for shelves only. Stack colors are sold as photographed. The are not glued together so you can move them around or combine stack colors.

More combinations coming!
Find them in my Etsy Shop

Posted by fabulouslyflawedminiatures at 2:10 PM No comments: Links to this post

I found this wonderful cherry graphic on The Graphics Fairy website and knew I wanted to create a vintage inspired sign. After playing around with it for a while, this is what I came up with. It is very charming and "that cherry graphic" is gorgeous! Measure about 1inch wide x 1 9/16 long.

Find it in my Etsy Shop 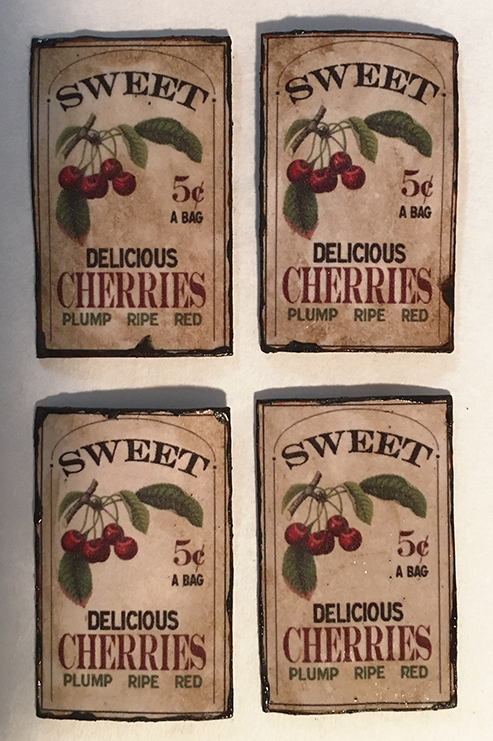 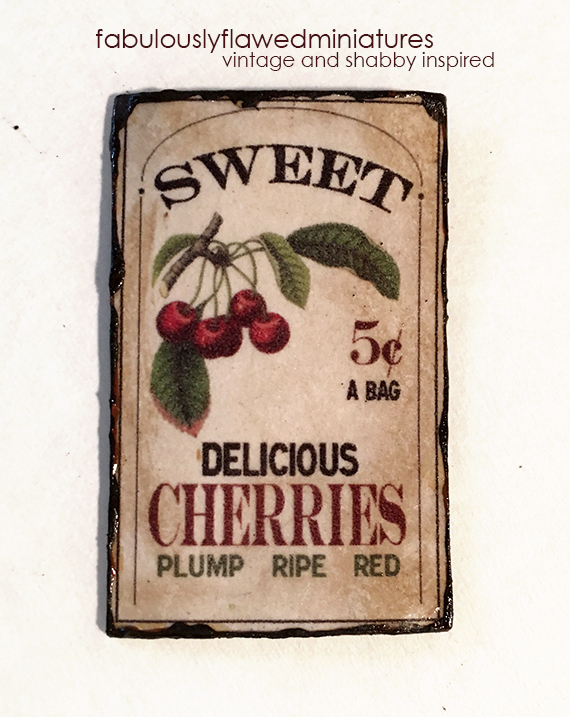 Posted by fabulouslyflawedminiatures at 5:43 PM No comments: Links to this post

Although I don't take custom orders, I do try to create things that people request of me (I always contact them once done). I have a small list that I am slowly getting through. A few months ago, a customer requested that I make Vintage Eye Charts (I love eye charts too).
I designed them in Photoshop, aged the front and put the completed image on a rusted metal backing with a rust trim. I think they look pretty vintage :).
Find them in my Etsy.


Posted by fabulouslyflawedminiatures at 3:32 PM No comments: Links to this post

Finished the first wing chair completely. Made a grayish blue wash for the base and found a matching stripe fabric for the pillow (hat not included). A nice addition a Shabby Chic Miniature Dollhouse.
Find it in my Etsy Shop. 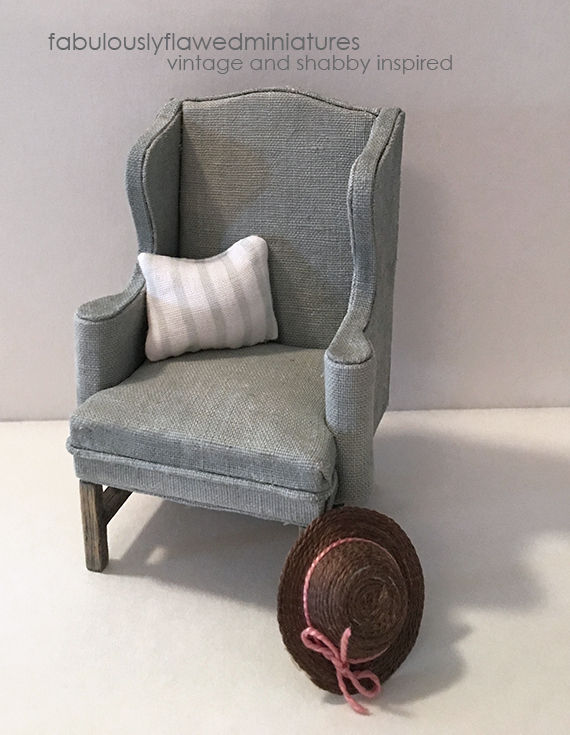 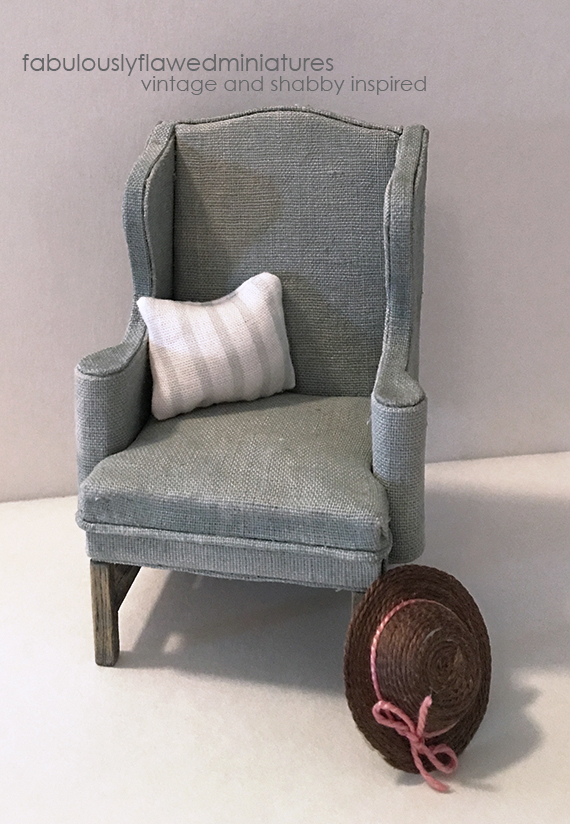 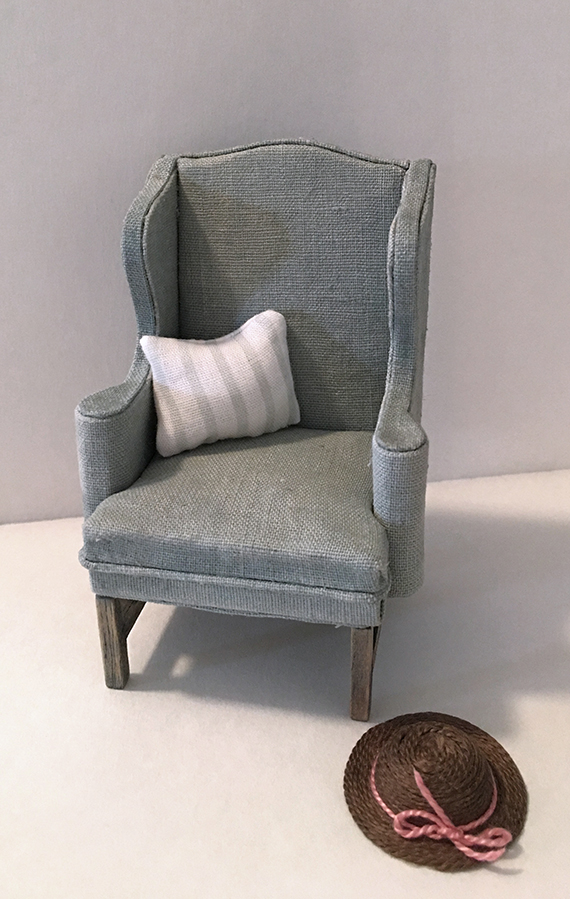 Posted by fabulouslyflawedminiatures at 6:44 PM No comments: Links to this post

Just finished this upcycled wing chair in the linen dyed with Annie Sloan Chalk Paint (Aubusson Blue with a tea bath). I love the color, but I'm confused on what to do with the base. Should I go dark, light or a grayish weathered stain. I'm leaning toward the grayish weathered??????
I also want to change the pillow. I think it would look better with a Chevron pattern that has the same color design and an off white background. (This look is just for this photo). Let me know what you think about the base.


Posted by fabulouslyflawedminiatures at 4:54 PM No comments: Links to this post

I've been obsessing over dyeing fabric lately. Today I got a chance to play around with a few potions :). Although I was researching Rit Dyes, I discovered that you can use Annie Sloan Chalk Paints to dye fabric. I was going crazy for the chance to try this out!

This all started with a linen duvet set that I no longer liked the color. I discovered via the Rit website, that you can easily dye linen. So off to the craft store. As much as I like light girly colors, with my husband…no way! So I chose the recipe for a beautiful Pantone Color called Turbulence. It's a mix of Kelly Green and Navy. This is my first try at dyeing fabric, so there were some hit and misses.

First, the Rit Dye. I was too excited to measure anything, but I did manage to get some great colors with the a piece of linen fabric I had. The first photo is Navy on the creme linen. It is really pretty.  The second photo is the Navy and Kelly Green Mix. The one one the left is really beautiful, I love this color! It's a little difficult to see in the photo, but there is a nice green tint to the navy. This is the color I want my duvet set, not the color I got ;(.

Of all the colors I tested, the only colors I decided to keep were the Duck Egg, Aubusson Blue and the Burgundy.

After running the linen through another bath of Annie Sloan Chalk Paint, I can say the colors did deepen. I wanted the colors to look muted, so I decided to let them sit in a tea bath before drying. This time I let them dry in the dryer. (See results below)

Finally, my duvet set, sigh…not so good. I ran low on the Kelly Green and Navy Rit Dye but decided to go for it anyway. Not a good decision, as the set is just a funny faded blue. I think I will go back to the store and purchase the 2 Rit Dyes and give it another shot. If it doesn't work out, than I at least have the beautiful dyed linen fabrics to create wonderful miniature wing chairs.


Posted by fabulouslyflawedminiatures at 2:36 PM No comments: Links to this post